“I’m never taking another class as long as I live.” I had convinced myself that this was a reality after I left UConn’s campus and prepared for the 2017 MLB Draft that June. There were a few reasons why I thought this, the main one being that I had convinced myself that the only way of making it through the Minor Leagues to the MLB would be by doing so in two or three seasons. This is not the case, especially for me. My skill set doesn’t jump off the diamond at you, the type of player that hits the ball 450 feet and burns down the baseline. I’m going to do exactly what I have to do to win that day, to set my teammates up for success, and succeed when my teammates set me up for success. My batting practice does not include 10 home runs and I’m not going to get clocked at 97 mph throwing across the diamond. In reality, my player type doesn’t result in a player shooting up the system quickly, but it gives me a chance to make it eventually to prove that consistency and endless effort can get you anywhere in this game, and in life.

Anyways, what was I talking about? Oh yeah, school. Setting up classes and communicating early with professors about missing the first week of school was quite the hassle, mostly because I was doing all of this in the locker room in between lifts and batting practice.

“What are you doing, Yahn?” Someone would ask me in the locker room.

“Getting my classes in order for the fall,” I would reply.

“That sucks, why are you doing that?” Imagine having that conversation individually with 15 or so guys, it definitely made me wonder if following through with this and finishing school was worth the effort. Some of my teammates thought I was doing it because I did not believe I could make it to the MLB. It was really hard, but I had to swat away all those negative thoughts and go back and finish, which at the time felt forced.

Our last game of the season for Aberdeen was Labor Day on Monday, September 3rd against the Hudson Valley Renegades in Fishkill, N.Y., and our record stood at 37-37. The Ironbirds were fighting for the last Wild Card spot until the very end of the season, as our loss in the first game of the three game series on Saturday, officially ended our mathematical chances. To add insult to injury, we lost on Sunday 19-2 in embarrassingly bad fashion as I had the day off and watched the fiasco from the bench. I went into that Sunday thinking about how great the summer had been up to that point, remembering the fact that we were nearly 10 games out of a wild card spot with the month of August to play and we got hot and gave ourselves a chance. I wanted to win that game so badly, for the Aberdeen fans who had made the trip all the way to Fishkill for the final series of the season, for our first year manager whose first season being above or below .500 was in the balance, and of course for friends and family who lived close by that attended the game that night.

I had an OK game at best, 1 for 5 with an RBI and a run scored and a few plays in the field, but we had blown a pretty significant lead. We were up 6-1 after three innings of play and were getting a little too comfortable with the lead. It’s hard to keep your focus after such a long season when you’re up by five on the last day, of course, but it started to slip away. We added two more runs after that, but Hudson Valley put up two runs in three consecutive innings, making it 8-7 going into the last two innings of the season.

My last at-bat of the season, in the 9th inning, I smoked one on the ground to the right side, appearing for sure it would sneak through the “4-hole” for a base hit to right field. But, the first baseman made a nice backhand play and got the force out at second for the fielder’s choice. A pair of base hits brought me around to third base with one out as we were desperately trying to push across an insurance run. Jean Carmona then hits a lazy fly ball to the outfield. I went back and tagged up at third base, getting my tired legs ready for the final sprint of the season. The ball slapped the outfielders glove and I took off, piercing my cleats into the turf third base foul line, then reaching the dirt home plate area. I took flight and turned my body slightly to the right to reach around the tag and touch home plate. What a beautiful slide it was on such a close play. I had executed it perfectly. 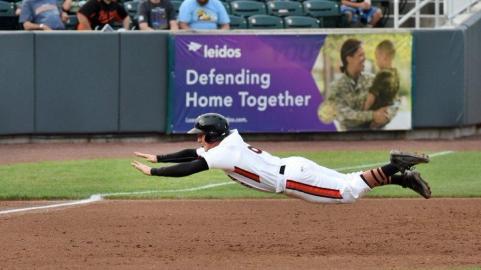 “HE’S OUT!” Screamed the umpire who, in my opinion, had never been more wrong about anything in his young life.

“ARE YOU BLIND? DID YOU EVEN WATCH THE PLAY? YOU ——- MORON!” Why he did not eject me I’ll never know. It probably all happened so fast for the both of us that neither of us could process my word choice quickly enough. The crowd was going bananas. The home crowd couldn’t believe that umpire called me out, and the Aberdeen/Sharon fans were cursing umpires entire life out. Our skipper, Kyle Moore, yanked me back into the dugout, reminding me I still had to play defense, before giving the umpire a piece of his mind. I was fuming. I wanted that to be my last run scored of the season. I wanted to be rewarded for that perfect slide, but that umpire (you don’t know how hard I am to not say anything specifically that will get me in trouble right now) called me out for whatever reason. I went back out to third base all sorts of pissed off during warm ups, but I finally pulled myself together and knew I’d botch a play when it mattered most if I carried that anger onto the field.

The Renegades came up and the first two hitters went down quickly, and the Ironbirds were one out away from finishing above .500 somehow after entering August with a record 20-26, going from 10.5 games out of the Wild Card spot to missing it by just 2 games. Needless to say, baseball was good to the Ironbirds in August, and we wanted to finish on a high note by getting this last out. Josh Keaton delivered a fastball and the left-handed hitter slapped a sharp two hopper towards the “5 hole” far to my left. I was going to belly flop towards it, but I really did not think I had a chance for this one. I followed it all the way and I went full extension as I watched it go past my visual. And then, WHAP, the very edge of my web held onto it. I did a push-up, spun my feet around and flipped it over to first base for the final out of the season. What a feeling. To finish one of your pro ball seasons with your favorite kind of defensive play, something that perhaps could only be trumped by a walk off. The beautiful summer with the Ironbirds had ended, as we shook hands for the last time, I said hello to some family and friends in attendance, and made my last trek over to the locker room. I looked around the stadium, trying to soak it in one last time as the stadium lights slowly dimmed down. Then, a reality check of a thought slapped me in the face as I stepped out from between the white lines for the last time in 2018.

“Holy shit. I have class in 12 hours,” I whispered to myself. It was a sad thought for a somewhat sad time. We all showered and joked around one more time in the away locker room and said our goodbyes, knowing for sure that because of trades, injuries, call ups, etc., that this would be the last time that group of men were ever going to be in the same room. My Dad and I rode home together in my pick-up truck that I had driven up north a few days earlier, and all the focus I could possibly muster up had to make a complete 180 from playing ball to being a full time student with six classes.

I had made an effort to let all of my teachers know my situation, and that made returning to the classroom for that first week very smooth, at least compared to my anxious expectations as I took the elevator up to the 4th floor of Oak Hall for the first class of the year. It was at the exact moment, when I sat down in Professor Kalb’s Reporting and Editing TV and Radio News, that I realized how important my being back there was, and that I was exactly where I needed to be for the fall of 2018. It wasn’t easy by any stretch, but it was fun taking an entire slate of Journalism specific classes and creating so many cool pieces of work, which led to the creation of an awesome portfolio. My teachers this fall were more than great to me, my Journalism advisor and academic advisor, Mike Stanton and Alana Butler respectively, helped me through the graduation process and approved my plan of study, and despite some incredibly shaky semesters in the past I was able to finish on a great note with UConn academically with a 3.0 GPA in six classes. It could not have gone any better.

I love baseball. I have confidence that professional baseball is going to work out exactly the way I have I have imagined it would in my dreams. But I love journalism as well. I love writing and I love sharing ideas, events, and peoples stories in creative ways. Finishing my degree has cemented the fact that my two loves have given me two amazing opportunities, two paths in this life, one that I never thought would be possible. I am forever grateful to my teachers and coaches from all walks of life, from Sharon Center, Housatonic Valley, and UConn, to Sharon Little League, Team Connecticut

Baseball, UConn Baseball, and the Baltimore Orioles. But most importantly, I am forever in debt to my parents, my sisters, and all of my beautiful friends who have supported me and made the adventures more than fun. I cannot thank you all enough. I didn’t do anything, WE did it.

6 thoughts on “No More Homework”